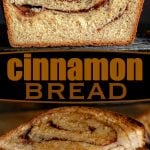 Homemade Cinnamon Bread is a thing of beauty and you’ll never believe how easy it is to make! Homemade bread is always a special treat but when you add in swirls of cinnamon sugar? PERFECTION. Use the leftovers for French toast this weekend! Make sure to try these breakfast favorites: Buttermilk Pancakes, Biscuits, and Hashbrown Breakfast Casserole!

Cinnamon Bread is one of those recipes I tend to make predominately in the fall and winter months. I don’t know why for sure but I think it has to do with the welcoming, homey, spicy aroma the bread emits while it’s baking to golden brown perfection.

Cinnamon just screams fall to me and when you combine that with the coziness of homemade bread, we’re talking about seriously good eats.

This easy cinnamon bread recipe combines delicious cinnamon flavor with a fragrance that permeates the entire house and systematically makes every. single. person. HAPPY. That’s the power of cinnamon. Oh yeah, and a little bit of sugar too, of course 😉

For My Cinnamon Lovers

I’m obsessed with all things cinnamon and if you are too, you’re not going to want to miss these favorites: Cinnamon Sugar Pumpkin Muffins, Maple Cinnamon Glazed Peanut Butter Cookies, and this Pear Ginger Cinnamon Oat Smoothie – yum!

Tips and Tricks for the BEST Cinnamon Bread 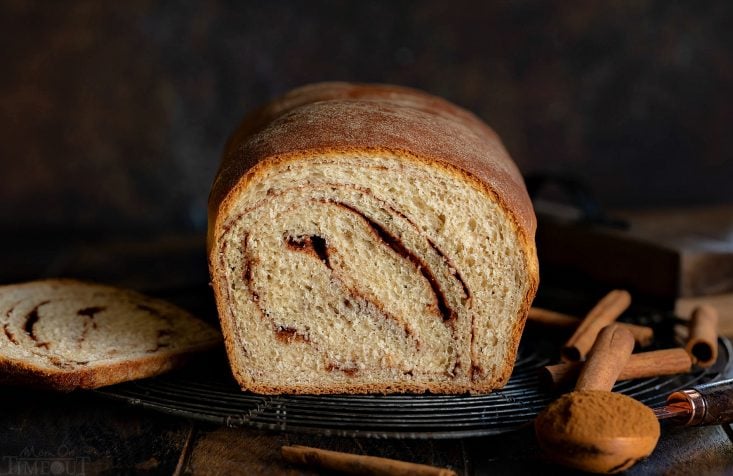 A lot of readers have asked if they can use this recipe to make Cinnamon Raisin Bread and the answer is most definitely! The recipe remains the same except sprinkle on a half cup of raisins on top of the cinnamon and sugar mixture before rolling up. (Use more or less to your liking.)

This bread is a yeast bread meaning there is rise times and yeast involved. That being said. It takes about 10 minutes TOTAL of hands on time and the results are amazing.

You’ll find the usual bread ingredients here with a few special items that take this bread to the next level:

I find bread-making to be such a peaceful and rewarding endeavor. A little bit of work followed with some rise time. A little more work and then a little more rising. Throw it in the oven and enjoy the glorious fragrance and then it’s time to eat! 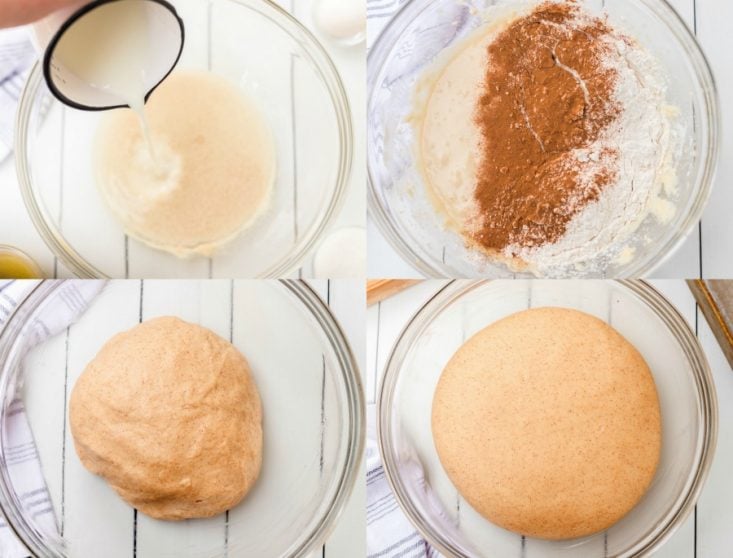 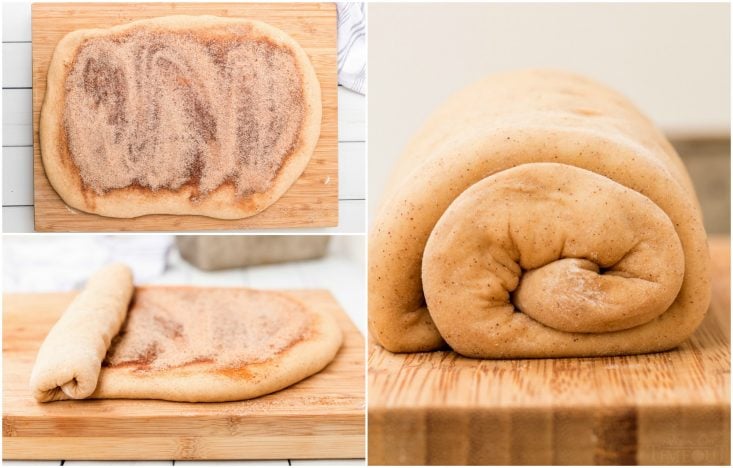 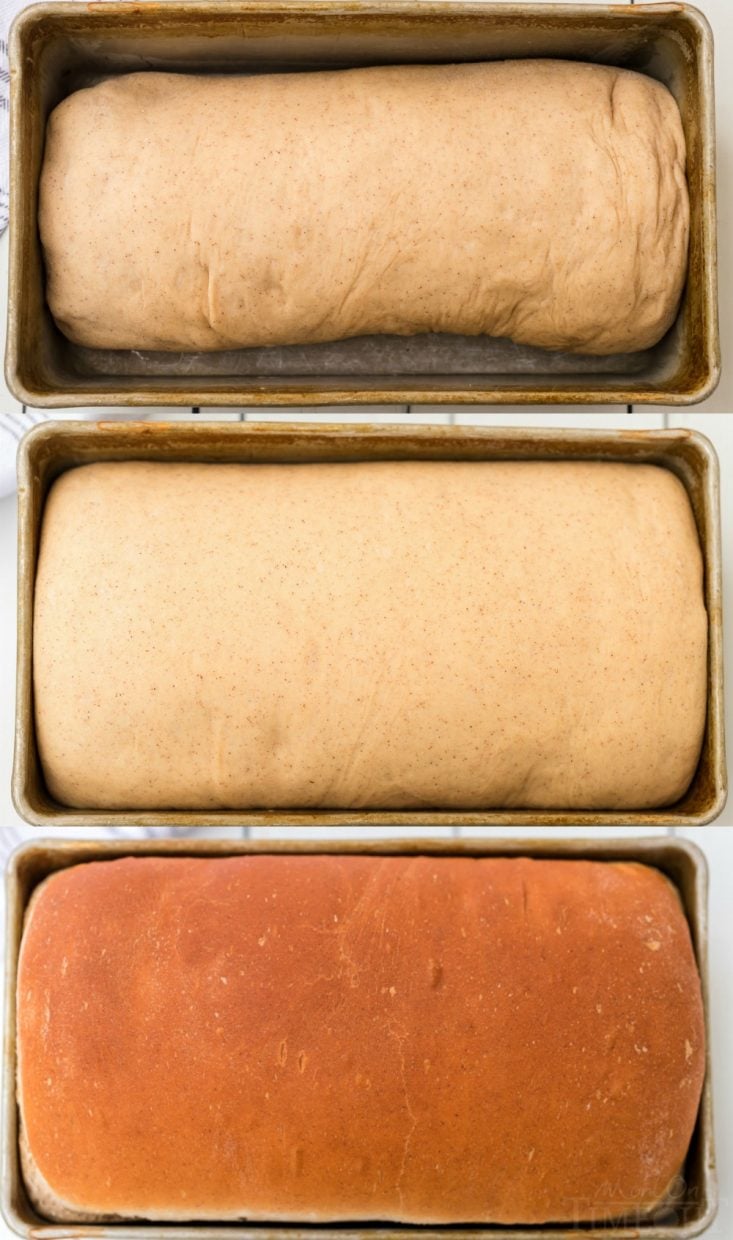 Do I Need a Stand Mixer

Nooooo, but boy does it help! If you have carpal tunnel like I do, kneading bread can be a serious pain. I love using my stand mixer for not only mixing the dough together but also for kneading. Just pop on the dough attachment and let ‘er go for about 5 minutes or so.

If you don’t have a stand mixer, DO NOT go buy one just for this bread. Unless you really want to… You can absolutely knead by hand for about the same length of time or until the dough forms a nice ball and springs back when gently pressed.

How To Enjoy Cinnamon Bread

This bread is simply divine fresh from the oven. And if you can’t get through a whole loaf in one sitting – try it toasted with a little butter the next day and then use the rest for french toast this weekend.

I love how this bread can be enjoyed day after day and in so many different ways. Reece thinks a slice of Cinnamon Swirl Bread is a delicoius afternoon snack and I can attest to it’s perfection for a midnight snack. Perfectly sweet and full of cinnamon flavor, this bread is a must-make in our home. 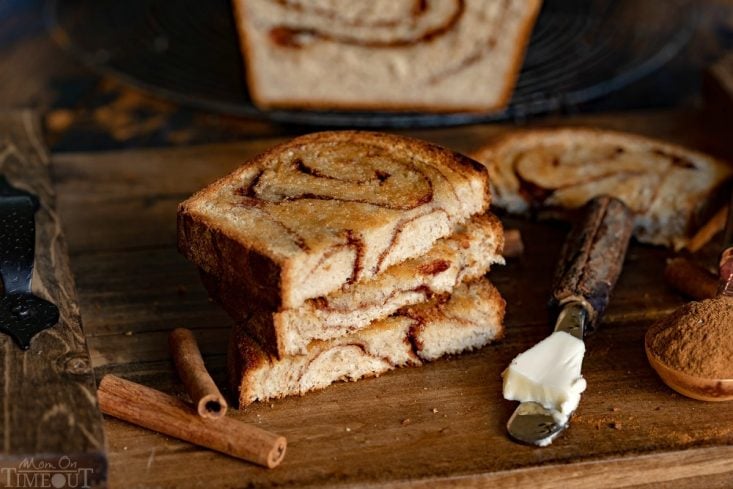 How To Make Cinnamon Bread 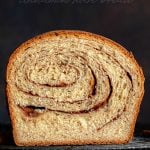